Our own dog came of her own mistake with her paw under my horse's foot. Great fright of course, a lot of screaming, a lot of blood.  We first stopped the heavy bleeding and after it had settled down  we have a better look to see what was going on. It was clear that the sole of her foot had cracked open by the pressure.

It was not clear at the time whether there was more to her. I got her right on a magnetic field blanket. She calmed down and lay down peacefully. That was the sign to me that no bones were damaged and I could focus on the injured paw pad. Luckily I had a laser at home and I could immediately start with the laser treatment.

Every day you saw the wound become more beautiful, calmer. You could see the new tissue developing along the edges. After a week, the wound looked like this:

And she was able to use the leg reasonably well again.

After another 1 1/2 weeks of laser therapy the wound was only very small and she could do everything she wanted again. 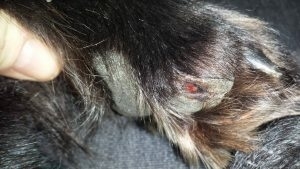 It was scary, but luckily everything went well. At least she stays a little further away from the horse's feet now.

Last Friday my horse / trotter Echo Oldeson won a race in Germany. Everyone was amazed at his reappearance, because they knew about his tendon injury. I wanted to thank you again for using / renting the laser device, it was in February 2019 … when I rang the bell with you.

Echo was caught in his tendon, the most important one too. A hole of 7 cm turned out later, I have been about to euthanize him, but my feeling said to give it a shot. Been working with the laser every day for months and that has helped, you can't even see where the hole was anymore. 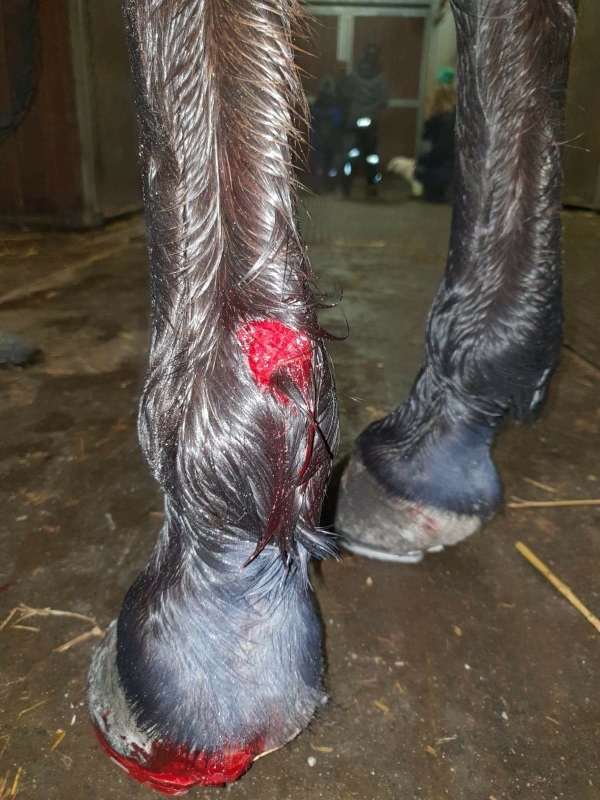 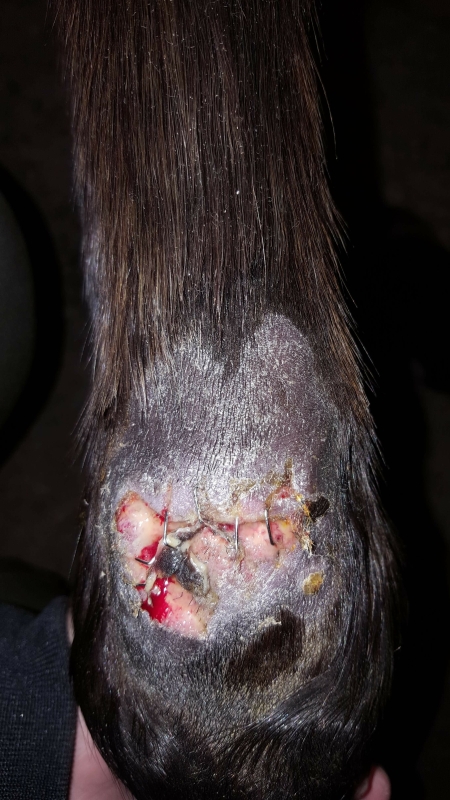 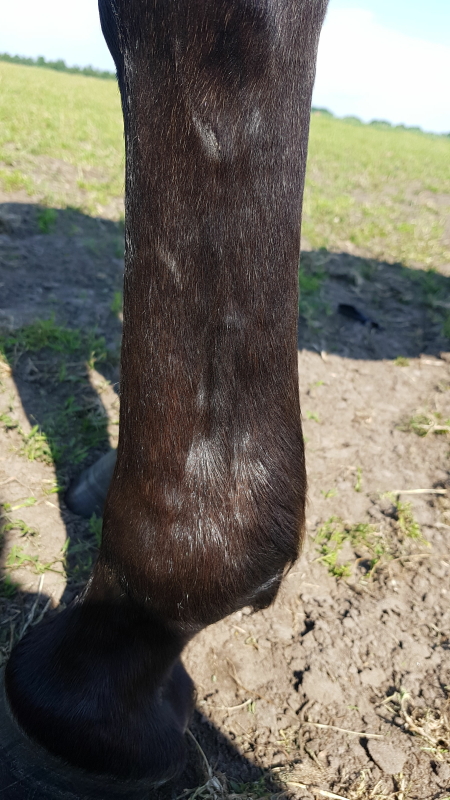 My 8 year old gelding kept a bulge above the bullet on the outside after a fall in the horse walker. So, after 10 days of taking it easy, the bump stayed, hop, to DAP Bodegraven. My horse was not lame, but after a scan made by Sander de Blaauw, it turned out that the intermediate branch of the tendon was 30% damaged, he also calls this the shin. He often sees these kinds of injuries after, for example, turning the bullet. So this was in line with my story of the fall in the mill.

The tendon was injected directly with PRP and I had to walk it for 6 weeks. In my case among the man because he is very busy on the hand. Under the saddle I regularly had lessons from Solange Schrijer (physiotherapist and equine chiropracter). From her I learned to let my horse walk through the body, erect, low for a long time, etc. In this way he kept on working well, loosely through his body and he lost little muscle mass.

In addition, Solange Schrijer regularly advised me to laser the tendon. She herself has the Centurion laser from Magnacare. I rented the medium laser through Magnacare and I lasered my horse's leg daily for a month. I held the so-called "shower head" in one place for 30 seconds and went down the entire lower leg. This took me 15 minutes every day and very honestly, anyone can do it. The laser is easy to set up and handle.

Besides the PRP and the Centurion laser, my horse has also been in the Aquatrainer of Horses in Hands twice a week. This to support the muscles, for variety and you immediately cool the tendon.

After six (long) weeks the time had come, my horse was scanned again by Sander de Blaauw at DAP Bodegraven. And it turns out: the tendon is completely healed and this without scar tissue! What a quick and good recovery of the tendon!

I am convinced that in addition to the PRP, the laser has done an incredible job and I can recommend it to everyone.

Now slowly build up and after the summer again pick up our work and back into the competition ring! 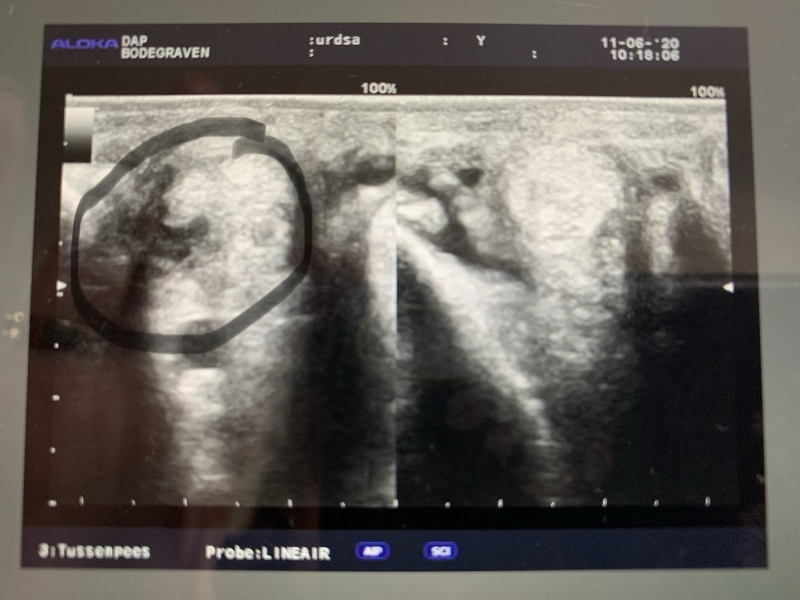 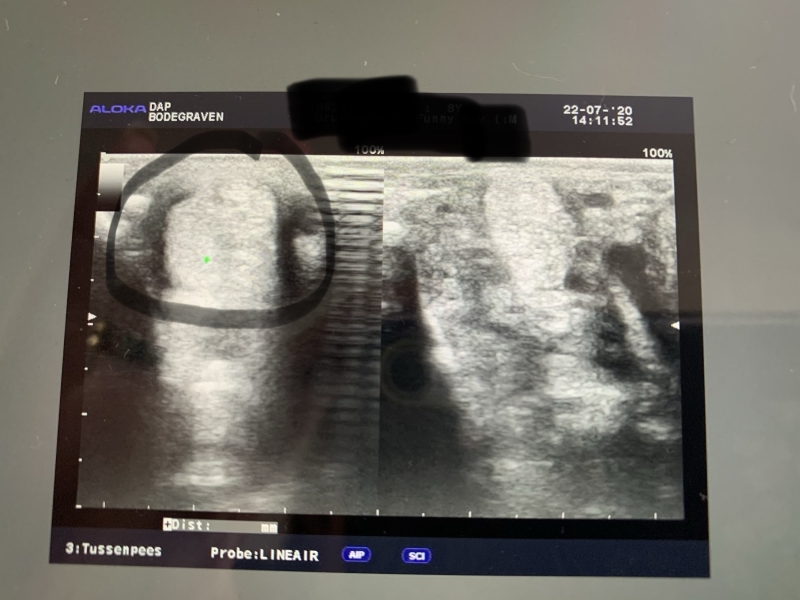 Wounds all over the body treated with laser therapy

We received the following story from Suzanne van Diggele. Her daughter's pony was seriously injured in a trailer accident. Fortunately, with the help of daily laser therapy, everything turned out well. 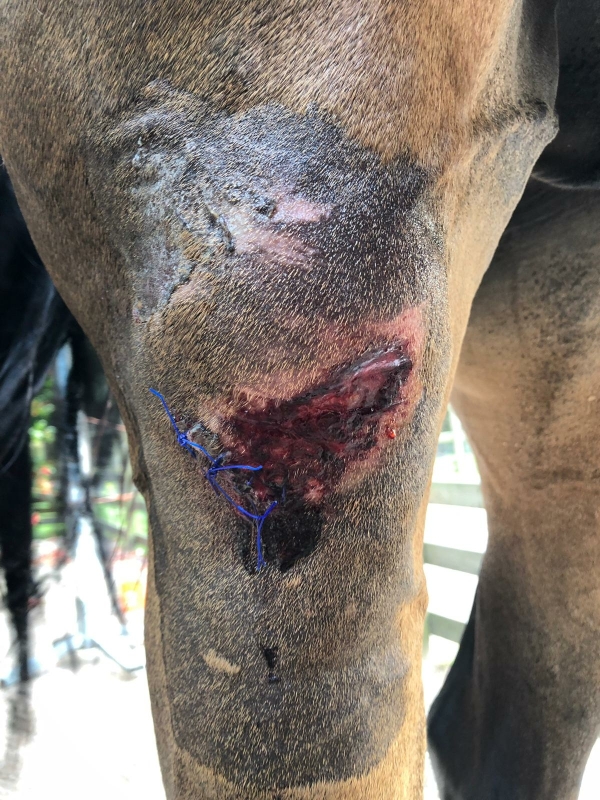 After 2 weeks of laser therapy it looked like this: 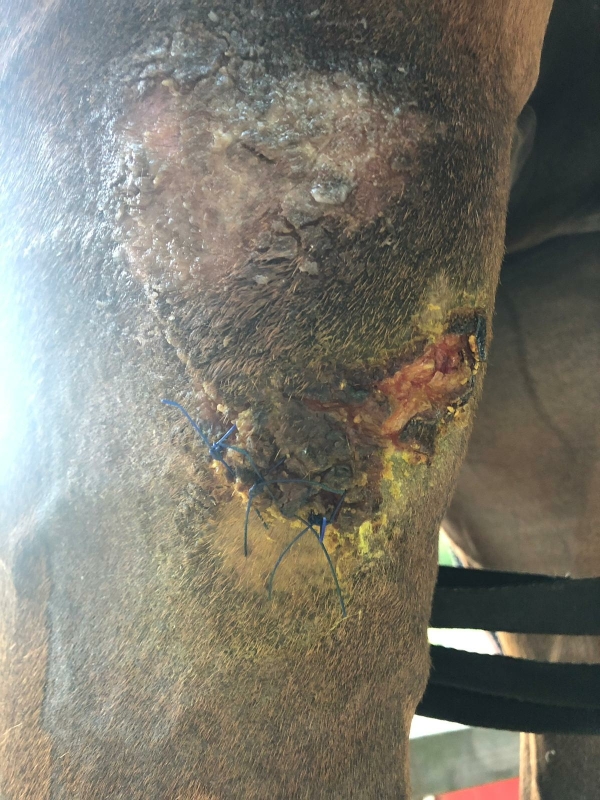 And after a month of laser therapy, this was the result: 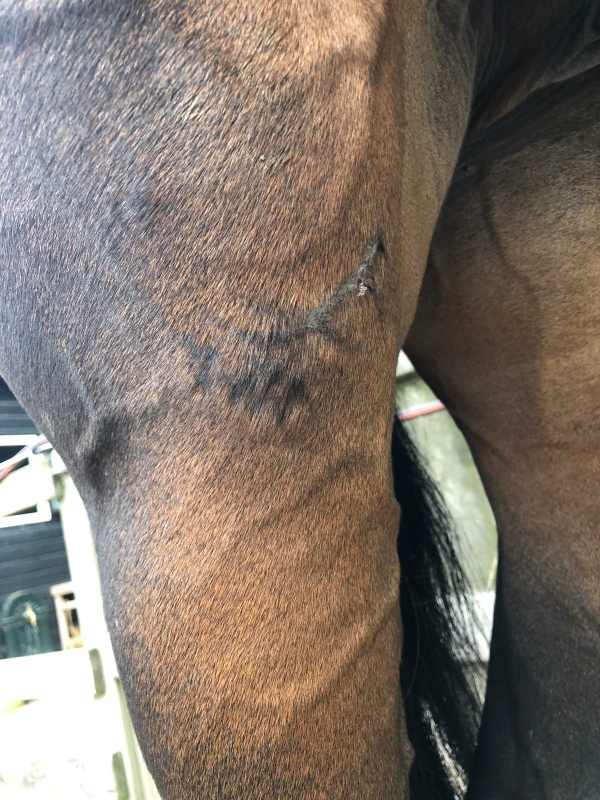 Recovery of wound on pastern bone

We received the following photo series from a customer. Her horse had an old wound on the pastern that had opened up again.

The wound could not be stitched due to the old scar tissue, the thin skin and the mobility of the joint. 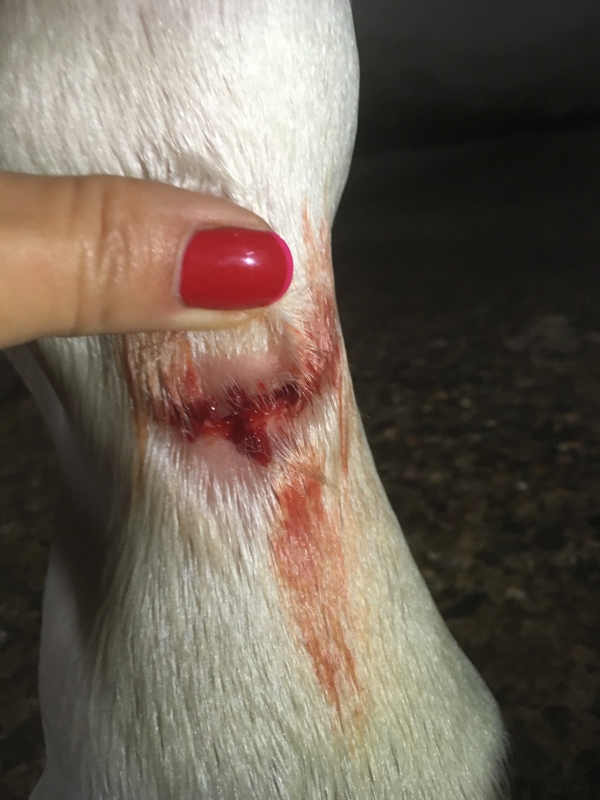 The vet said it would take 2 months for it to be completely closed and healed.

With laser therapy it was closed in less than 1 month (of which the last week already riding)! 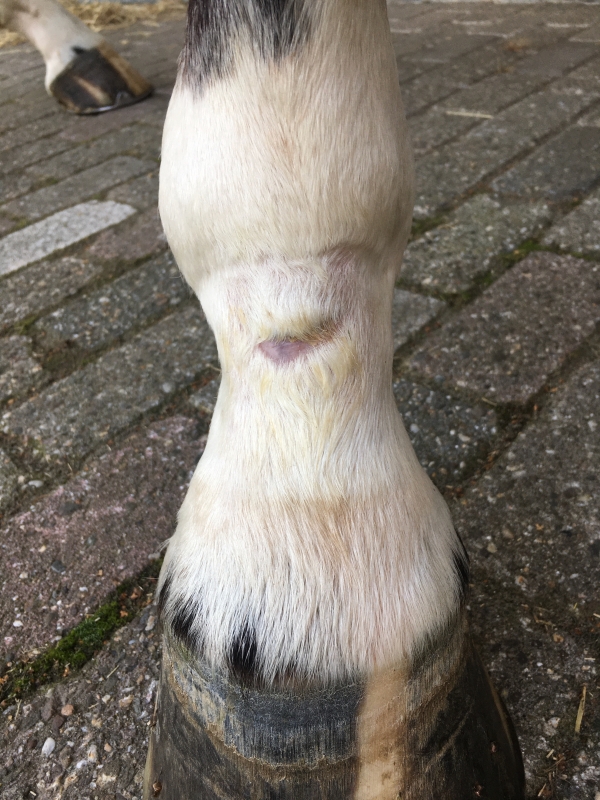 On Sunday I took my stick and stick lame horse from the pasture, she would actually prefer not stand on her right hind leg. Called the vet and he thought of a sore hoof, we packed the foot with wet end in the hope the next day the location of the abscess could be found. Blacksmith there, there was no abscess......... Putting her on painkillers and made an appointment to scan the leg in the stable (X-rays and ultrasound), it seems to be a tenosynovitis and a not very nice tendon (the latter would be "negligible" and that did not cause the pain).

The advice was; injecting with cortico steriods. After doubting decided for the injection with cortico steroids, but there was no effect and the leg and remained the same (painful and slightly swollen). Since she could not without the painkillers, I opted for a second opinion at a horse clinic. They did another scan where something else came out; She had a hole in her ligament just above the fetlock, this "disease" they rarely see. Option was an exploratory operation, they would then clean and cut the ligament, the chances of recovery remained "reserved". In consultation with the vet we decided todo her 24/7 on the meadow to walk, expanding the walk and still try to build off the painkillers. So we could give her during he summer the chance to recover on he own. According to the vet if she had not improved after 2 months we had to consider surgery.

I spoke to an acquaintance on the phone and did the whole story, which she said, if I were you I would apply laser therapy. Never heard of it, but it was worth trying, I finally had nothing to lose! I contacted Arja from MagnaCare and 2 days later I had the laser in the stable! In 10 days the leg is 2.5 cm thinner in size and she could do without pain relief! I did not know what I was going through! The first 10 days I have treated the leg 2x per day with the laser and after that 1x per day. I have done this for 4 months, the last month I have completely phased out.In total the leg shrunk about 3 cm leg and it is now the same size as her other hindleg. The area is still shrinking, it is soft, not painful and is absolutely sound (in all courses!).

And that at her age, 21 years! We are already 3 months without laser and it stays good!I am very grateful to my acquaintance that she has told me about the laser and Arja very grateful because the laser was with 2 days at my house and gave me the instructions given how I had to apply.In short, very happy with the laser, a fantastic result! I recommend everyone, if dealing with such problems call Arja leg for advice and which treatment fits there, it really works!

My dog has one week for its UV test, his paws faltered. Frontpaws a flap that was loose, behind just broken. With an UV test your dog runs 20 km beside your bike with 2 x break. After 20 km the soles should look good. So it was very frustrating that he had broken his pads. I have had he dog's pads lasered two times and he has taken his UV exam with gloss !! 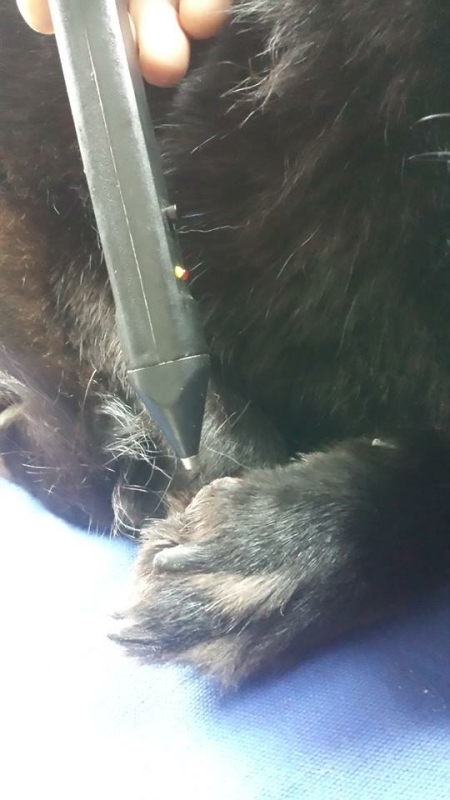 Experiences of users of the minipulse
25 januari 2022